I loved loved loved this book. Ms. Savage read it a few days ago and told me she cried her eyes out. I was anticipating a cry and boy did I cry. Amber Appleton is one of the best characters I have ever read and experienced and I wish I could know her in real life and call her a friend. This officially makes Matthew Quick by new favorite author as I loved Boy 21 and Forgive Me, leonard Peacock as well. Well done!!!

Amazon Summary
Amber Appleton lives in a bus. Ever since her mom's boyfriend kicked them out, Amber, her mom, and her totally loyal dog, Bobby Big Boy (aka Thrice B) have been camped out in the back of Hello Yellow (the school bus her mom drives). Still, Amber, the self-proclaimed princess of hope and girl of unyielding optimism, refuses to sweat the bad stuff. But when a fatal tragedy threatens Amber's optimism--and her way of life, can Amber continue to be the rock star of hope?With an oddball cast of characters, and a heartwarming, inspiring story, this novel unveils a beautifully beaten-up world of laughs, loyalty, and hard-earned hope. The world is Amber's stage, and Amber is, well...she's sorta like a rock star. True? True.

Posted by Lindsey Meyer at 12:57 PM No comments:

The Radiance of Tomorrow by Ishmael Beah 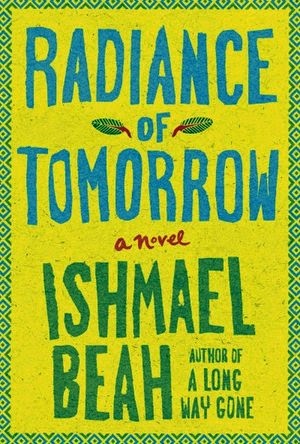 I loved Ishmael Beah's Memoir A Long Way Gone and couldn't wait to read his first novel. The book is very depressing about building a life after war. As an American it is hard to understand what life is like in an undevelopedplace for corruption and theft are in charge. Oftentimes while reading this book I found myself feeling defeated for the characters and their families.

Amazon Summary
At the center of Radiance of Tomorrow are Benjamin and Bockarie, two longtime friends who return to their hometown, Imperi, after the civil war. The village is in ruins, the ground covered in bones. As more villagers begin to come back, Benjamin and Bockarie try to forge a new community by taking up their former posts as teachers, but they’re beset by obstacles: a scarcity of food; a rash of murders, thievery, rape, and retaliation; and the depredations of a foreign mining company intent on sullying the town’s water supply and blocking its paths with electric wires. As Benjamin and Bockarie search for a way to restore order, they’re forced to reckon with the uncertainty of their past and future alike.
With the gentle lyricism of a dream and the moral clarity of a fable, Radiance of Tomorrow is a powerful novel about preserving what means the most to us, even in uncertain times.

Posted by Lindsey Meyer at 11:30 AM No comments:

Escape from Camp 14 is the story of the first known person to be born inside a North Korean prison and escape. This was a hard book to read in the sadness and conditions that the prisoners withstand. The author points out that the type of cruelty and treatment of these prisoners is worse than the Holocaust and has been going on for much longer than any other type of genocide worldwide.

North Korea’s political prison camps have existed twice as long as Stalin’s Soviet gulags and twelve times as long as the Nazi concentration camps. No one born and raised in these camps is known to have escaped. No one, that is, except Shin Dong-hyuk.
In Escape From Camp 14, Blaine Harden unlocks the secrets of the world’s most repressive totalitarian state through the story of Shin’s shocking imprisonment and his astounding getaway. Shin knew nothing of civilized existence—he saw his mother as a competitor for food, guards raised him to be a snitch, and he witnessed the execution of his mother and brother.
Posted by Lindsey Meyer at 11:07 AM No comments:

The One by Kiera Cass ( Book 3 of The Selection) 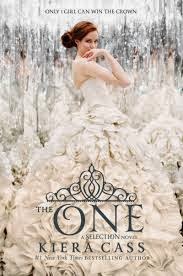 I have been dying to finish this series and it did not disappoint. I read this over the weekend and used every free minute to read and get to the end. I was secretly hoping as I was reading that this would be turned into a movie so I could love America, Maxon and Aspen on the big screen. Fingers crossed.
Posted by Lindsey Meyer at 11:00 AM No comments: