Say What You Will by Cammie McGovern (Abe Book) 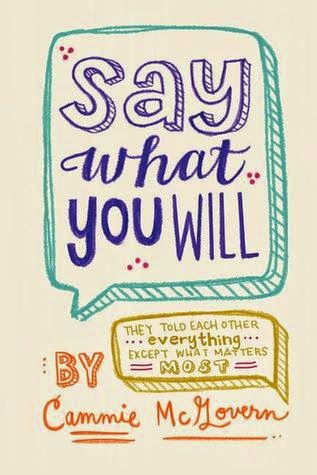 I really enjoyed this book. I found it fascinating learning about Amy's disability and how she worked so hard not to let it hold her back. I also liked the aspect of Matthews OCD and how the two of them came to rely and need each other. I highly recommend to all!

Amazon Summary
John Green's The Fault in Our Stars meets Rainbow Rowell's Eleanor & Park in this beautifully written, incredibly honest, and emotionally poignant novel. Cammie McGovern's insightful young adult debut is a heartfelt and heartbreaking story about how we can all feel lost until we find someone who loves us because of our faults, not in spite of them.
Born with cerebral palsy, Amy can't walk without a walker, talk without a voice box, or even fully control her facial expressions. Plagued by obsessive-compulsive disorder, Matthew is consumed with repeated thoughts, neurotic rituals, and crippling fear. Both in desperate need of someone to help them reach out to the world, Amy and Matthew are more alike than either ever realized.
When Amy decides to hire student aides to help her in her senior year at Coral Hills High School, these two teens are thrust into each other's lives. As they begin to spend time with each other, what started as a blossoming friendship eventually grows into something neither expected.
Posted by Lindsey Meyer at 1:20 PM No comments: 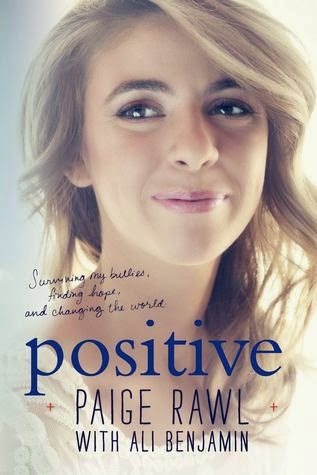 I really enjoyed this memoir. I felt like a learned a lot from Paige and about HIV and also how important it is to be who you are and stay true to yourself. We can all learn from Paige's positive attiditude on life and her ability to move on from those who tried to hurt her.

Amazon Summary
An astonishing memoir for the untold number of children whose lives have been touched by bullying. Positive is a must-read for teens, their parents, educators, and administrators—a brave, visceral work that will save lives and resonate deeply.
Paige Rawl has been HIV positive since birth, but growing up, she never felt like her illness defined her. On an unremarkable day in middle school, she disclosed to a friend her HIV-positive status—and within hours the bullying began. From that moment forward, every day was like walking through a minefield. Paige was never sure when or from where the next text, taunt, or hateful message would come. Then one night, desperate for escape, fifteen-year-old Paige found herself in her bathroom staring at a bottle of sleeping pills.
That could have been the end of her story. Instead, it was only the beginning. Paige's memoir calls for readers to choose action over complacency, compassion over cruelty—and above all, to be Positive.
Includes twenty-five photos from Paige's personal collection throughout.

Posted by Lindsey Meyer at 11:10 AM No comments: