Born a Crime: Stories from a South African childhood by Trevor Noah 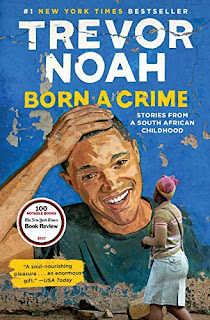 This has been on my to-read list for a while. I heard the audiobook was amazing so I was waiting to listen to this book instead of reading it. However, Book Club chose this book as the last book of the school year so I needed to read it ASAP. I LOVED THIS BOOK. I laughed, I learned a lot and I followed along with Trevor Noah's life and journey. I think anyone and everyone can enjoy this book and learn at the same time.

Trevor Noah’s unlikely path from apartheid South Africa to the desk of The Daily Show began with a criminal act: his birth. Trevor was born to a white Swiss father and a black Xhosa mother at a time when such a union was punishable by five years in prison. Living proof of his parents’ indiscretion, Trevor was kept mostly indoors for the earliest years of his life, bound by the extreme and often absurd measures his mother took to hide him from a government that could, at any moment, steal him away. Finally liberated by the end of South Africa’s tyrannical white rule, Trevor and his mother set forth on a grand adventure, living openly and freely and embracing the opportunities won by a centuries-long struggle.
Born a Crime is the story of a mischievous young boy who grows into a restless young man as he struggles to find himself in a world where he was never supposed to exist. It is also the story of that young man’s relationship with his fearless, rebellious, and fervently religious mother—his teammate, a woman determined to save her son from the cycle of poverty, violence, and abuse that would ultimately threaten her own life.
The stories collected here are by turns hilarious, dramatic, and deeply affecting. Whether subsisting on caterpillars for dinner during hard times, being thrown from a moving car during an attempted kidnapping, or just trying to survive the life-and-death pitfalls of dating in high school, Trevor illuminates his curious world with an incisive wit and unflinching honesty. His stories weave together to form a moving and searingly funny portrait of a boy making his way through a damaged world in a dangerous time, armed only with a keen sense of humor and a mother’s unconventional, unconditional love.
Posted by Lindsey Meyer at 11:47 AM No comments: 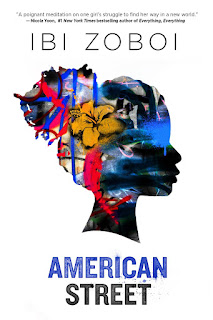 I listened to this book and I think I really enjoyed this book more because the audio and accents were so wonderful to listen to. I am curious if the book would be as enjoyable if I read it instead of listening to American Street. The main character has just arrived to Detroit from Haiti and has been separated from her Mother because of an immigration issue. I feel many people in today's current climate of DACA could relate to this story.

American Street is an evocative and powerful coming-of-age story perfect for fans of Everything, Everything; Bone Gap; and All American Boys.
In this stunning debut novel, Pushcart-nominated author Ibi Zoboi draws on her own experience as a young Haitian immigrant, infusing this lyrical exploration of America with magical realism and vodouculture.
On the corner of American Street and Joy Road, Fabiola Toussaint thought she would finally find une belle vie—a good life.
But after they leave Port-au-Prince, Haiti, Fabiola’s mother is detained by U.S. immigration, leaving Fabiola to navigate her loud American cousins, Chantal, Donna, and Princess; the grittiness of Detroit’s west side; a new school; and a surprising romance, all on her own.
Just as she finds her footing in this strange new world, a dangerous proposition presents itself, and Fabiola soon realizes that freedom comes at a cost. Trapped at the crossroads of an impossible choice, will she pay the price for the American dream?
Posted by Lindsey Meyer at 11:35 AM No comments:

We Are Okay by Nina Lacour ( Abe Lincoln Book) 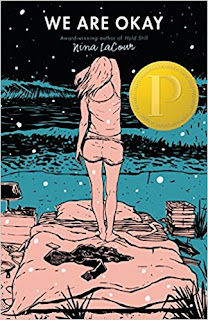 The books starts off with a lot of unknown questions for the reader. What has happened and who are these characters. As the story progresses we get snippets of what has happened in the past that has led us to this current future. I enjoyed this read and can see why it was selected to be on the Lincoln List.

You go through life thinking there’s so much you need. . . . Until you leave with only your phone, your wallet, and a picture of your mother.
Marin hasn’t spoken to anyone from her old life since the day she left everything behind. No one knows the truth about those final weeks. Not even her best friend Mabel. But even thousands of miles away from the California coast, at college in New York, Marin still feels the pull of the life and tragedy she’s tried to outrun. Now, months later, alone in an emptied dorm for winter break, Marin waits. Mabel is coming to visit and Marin will be forced to face everything that’s been left unsaid and finally confront the loneliness that has made a home in her heart.
Posted by Lindsey Meyer at 11:32 AM No comments: 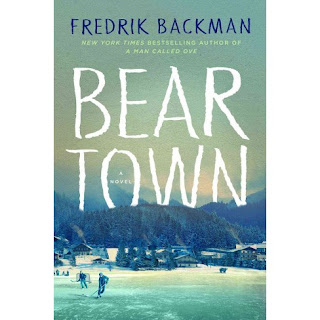 I had heard a lot of good things about this author and this book so I was very intrigued to finally read Beartown. Overall, I liked the book but it took me weeks to finish it. I have not been reading as much as I am so tired with a new baby but I also wasn't that excited about the book. I give it 3 out of 5 stars as the characters were well developed but the story line was a little slow moving.

People say Beartown is finished. A tiny community nestled deep in the forest, it is slowly losing ground to the ever-encroaching trees. But down by the lake stands an old ice rink, built generations ago by the working men who founded this town. And in that ice rink is the reason people in Beartown believe tomorrow will be better than today. Their junior ice hockey team is about to compete in the national semi-finals, and they actually have a shot at winning. All the hopes and dreams of this place now rest on the shoulders of a handful of teenage boys.Being responsible for the hopes of an entire town is a heavy burden, and the semi-final match is the catalyst for a violent act that will leave a young girl traumatized and a town in turmoil. Accusations are made and, like ripples on a pond, they travel through all of Beartown, leaving no resident unaffected.Beartown explores the hopes that bring a small community together, the secrets that tear it apart, and the courage it takes for an individual to go against the grain. In this story of a small forest town, Fredrik Backman has found the entire world.
Posted by Lindsey Meyer at 11:29 AM No comments: