Boy Nobody by Allen Zadoff 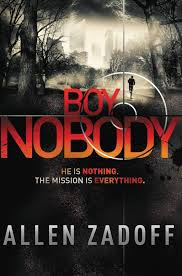 They needed the perfect assassin.

Boy Nobody is the perennial new kid in school, the one few notice and nobody thinks much about. He shows up in a new high school in a new town under a new name, makes a few friends and doesn't stay long. Just long enough for someone to die -- of "natural causes." Mission accomplished, Boy Nobody disappears, moving on to the next target.

But when The Program assigns him to the mayor of New York City, things change. Somewhere deep inside, Boy Nobody is somebody: the kid he once was; the teen who wants normal things, like a real home and a girlfriend; a young man who wants out. And who just might want those things badly enough to sabotage The Program's mission.

In this action-packed series debut, author Allen Zadoff pens a page-turning thriller that is as thought-provoking as it is gripping, introducing an utterly original and unforgettable antihero.

Posted by Lindsey Meyer at 4:16 PM No comments:

All The Truth That's In me by Julie Berry 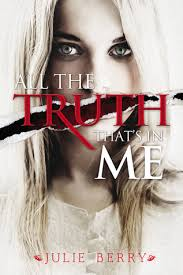 Amazon Summary
The village setting of this novel evokes the rigid religious communities of Colonial times, but Berry cleverly sets her story in an unnamed time and place so the protagonist's anguish and the town's mystery are the focus. Sixteen-year-old Judith is still in love with Lucas, even after his father held her prisoner for two years and violently silenced her by cutting out part of her tongue. Another girl went missing at the same time and her body was found washed down a stream. Only Judith knows the truth of what happened to Lottie, but her muteness leaves her an outcast in the village, even from her own mother, and the truth stays bottled up inside her. Told from Judith's narrow, troubled perspective, the story unwinds in taut chapters that peel back what happened two years before and gradually allows Judith to find her voice again. The austerity of the village and its harshly judgmental inhabitants help sustain a mood of dread. Judith does find tenderness in surprising places, and these secondary characters relieve not just her isolation but also offer readers moments of fun and promise as well. Lyrical language, a good mystery, and a compelling heroine–this is a page-turner with substance

Posted by Lindsey Meyer at 4:12 PM No comments:

If You Could Be Mine by Sara Farizan 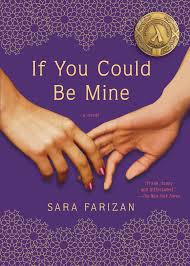 I really enjoyed this book. I found it to be so different than my normal selection but very engaging and well written. I enjoyed reading about daily life in Iran for teenagers and how life used to be different for women.

Amazon Summary
Seventeen-year-old Sahar has been in love with her best friend, Nasrin, since they were six. They’ve shared stolen kisses and romantic promises. But Iran is a dangerous place for two girls in love--Sahar and Nasrin could be beaten, imprisoned, even executed. So they carry on in secret until Nasrin’s parents suddenly announce that they’ve arranged for her marriage. Then Sahar discovers what seems like the perfect solution: homosexuality may be a crime, but to be a man trapped in a woman’s body is seen as nature’s mistake, and sex reassignment is legal and accessible. Sahar will never be able to love Nasrin in the body she wants to be loved in without risking their lives, but is saving their love worth sacrificing her true self?

Posted by Lindsey Meyer at 2:36 PM No comments: 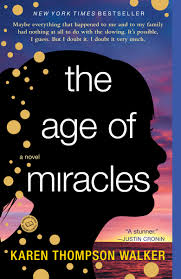 Age of Miracles is an end of the world title about the slowing of the earth's rotation around the sun and the damage that would cause to the whole planet. This was not my favorite end of the world book. I found it to be slow at times.

Amazon Summary
In The Age of Miracles, the world is ending not with a bang so much as a long, drawn-out whimper. And it turns out the whimper can be a lot harder to cope with. The Earth's rotation slows, gradually stretching out days and nights and subtly affecting the planet's gravity. The looming apocalypse parallels the adolescent struggles of 10-year-old Julia, as her comfortable suburban life succumbs to a sort of domestic deterioration. Julia confronts her parents' faltering marriage, illness, the death of a loved one, her first love, and her first heartbreak. Karen Thompson Walker is a gifted storyteller. Her language is precise and poetic, but style never overpowers the realism she imbues to her characters and the slowing Earth they inhabit. Most impressively, Thompson Walker has written a coming-of-age tale that asks whether it's worth coming of age at all in a world that might end at any minute. Like the best stories about the end of the world, The Age of Miracles is about the existence of hope and whether it can prevail in the face of uncertainty. --Kevin Nguyen

Posted by Lindsey Meyer at 7:49 AM No comments: 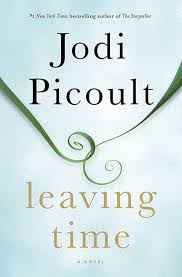 I always read the new Picoult book as soon as it hits the shelves and this book did not disappoint. Picoult is such a natural story teller that captivates the reader with the plot and characters within the first 15 pages. This book was not as traditional as her books in the past and had a few twists that I did not see coming, but made it all the more enjoyable.

Amazon
Jodi Picoult’s Leaving Time weaves elephant behavior into a search for a missing mother. The connection isn't as odd as it might sound at first, and Picoult has written another page-turning novel, even as it focuses on motherhood, loss, and grief. Teenager Jenna Metcalf was just three years old when her mother disappeared from an elephant sanctuary. Ten years later, she takes up the search for her mother, Alice, by studying Alice’s decade-old journals on grieving elephants. The research itself is fascinating, the hints about Alice’s disappearance are compelling; but Jenna cannot find her mother on her own. By enlisting the help of a formerly famous—now infamous—psychic, as well as a down-and-out private detective whose career went south during the botched investigation of Alice's disappearance, Jenna forms a sort of new family to help her in her quest. As the facts begin to come together—described in alternating chapters by Jenna, the psychic, the private detective, and Alice’s journals—it all heads toward a thrilling conclusion. And, yes, there is a big twist at the end.
Posted by Lindsey Meyer at 10:24 AM No comments: