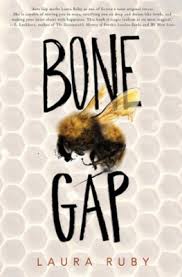 I was not a fan of this whimsical story. At times I felt lost and disinterested in the characters and the mystery.

Bone Gap is the story of Roza, a beautiful girl who is taken from a quiet midwestern town and imprisoned by a mysterious man, and Finn, the only witness, who cannot forgive himself for being unable to identify her kidnapper. As we follow them through their melancholy pasts, their terrifying presents, their uncertain futures, acclaimed author Laura Ruby weaves a heartbreaking tale of love and loss, magic and mystery, regret and forgiveness—a story about how the face the world sees is never the sum of who we are.

Posted by Lindsey Meyer at 9:30 AM No comments:

The Good Girl by Mary Kubica 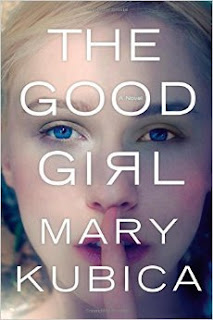 My sister recommended this book to me over the Summer. There were so many popular books this summer with "Girl" in the title so I figured I would give it a try. I LOVED the way the author told the story from various perspectives and time periods. This was a fast-paced thriller with very strong character building.

Amazon Summary
"I've been following her for the past few days.

I know where she buys her groceries, where she

works. I don't know the color of her eyes or

what they look like when she's scared. But I will."

One night, Mia Dennett enters a bar to meet her on-again, off-again boyfriend. But when he doesn't show, she unwisely leaves with an enigmatic stranger. At first Colin Thatcher seems like a safe one-night stand. But following Colin home will turn out to be the worst mistake of Mia's life.

When Colin decides to hide Mia in a secluded cabin in rural Minnesota instead of delivering her to his employers, Mia's mother, Eve, and detective Gabe Hoffman will stop at nothing to find them. But no one could have predicted the emotional entanglements that eventually cause this family's world to shatter.

An addictively suspenseful and tautly written thriller, The Good Girl is a propulsive debut that reveals how even in the perfect family, nothing is as it seems.

The Boy in the Black Suit by Jason Reynolds 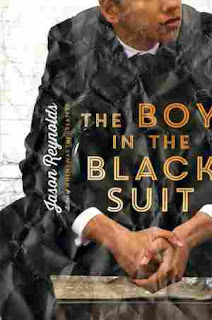 I really liked the main character in this book. I rooted for him and wanted him to find happiness and closure. The plot of this book was too slow for me and I didn't enjoy the story that much. It was a quick read and I think it would appeal to several young men.

Amazon Summary
Just when seventeen-year-old Matt thinks he can’t handle one more piece of terrible news, he meets a girl who’s dealt with a lot more—and who just might be able to clue him in on how to rise up when life keeps knocking him down—in this “vivid, satisfying, and ultimately upbeat tale of grief, redemption, and grace” (Kirkus Reviews) from the Coretta Scott King – John Steptoe Award–winning author of When I Was the Greatest.

Matt wears a black suit every day. No, not because his mom died—although she did, and it sucks. But he wears the suit for his gig at the local funeral home, which pays way better than the Cluck Bucket, and he needs the income since his dad can’t handle the bills (or anything, really) on his own. So while Dad’s snagging bottles of whiskey, Matt’s snagging fifteen bucks an hour. Not bad. But everything else? Not good. Then Matt meets Lovey. Crazy name, and she’s been through more crazy stuff than he can imagine. Yet Lovey never cries. She’s tough. Really tough. Tough in the way Matt wishes he could be. Which is maybe why he’s drawn to her, and definitely why he can’t seem to shake her. Because there’s nothing more hopeful than finding a person who understands your loneliness—and who can maybe even help take it away.

Posted by Lindsey Meyer at 10:35 AM No comments:

The Loners by Lex Thomas 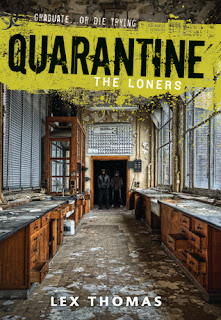 I LOVED THIS BOOK. It is not often I stumble upon a series where I have a very strong desire to continue on with the sequel. The plot is slightly unbelievable, but once you accept it for the dystopian novel that it is, you will quickly fall in love. I can't wait to continue the series and find out what happens to all of the gangs.

Amazon Summary
It was just another ordinary day at McKinley High--until a massive explosion devastated the school. When loner David Thorpe tried to help his English teacher to safety, the teacher convulsed and died right in front of him. And that was just the beginning.

A year later, McKinley has descended into chaos. All the students are infected with a virus that makes them deadly to adults. The school is under military quarantine. The teachers are gone. Violent gangs have formed based on high school social cliques. Without a gang, you're as good as dead. And David has no gang. It's just him and his little brother, Will, against the whole school.

In this frighteningly dark and captivating novel, a 2012 Booklist Editor's Choice, Lex Thomas locks readers inside a school where kids don't fight to be popular, they fight to stay alive.
Posted by Lindsey Meyer at 10:31 AM No comments:

The Martian by Andy Weir 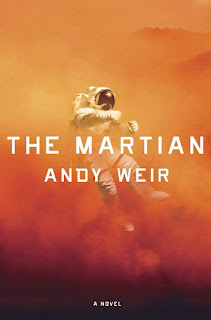 I saw that the movie was coming out soon so I rushed to read the book first. The book was definitely interesting and exciting but a little too science focused for me.

Amazon Summary
Six days ago, astronaut Mark Watney became one of the first people to walk on Mars.

Now, he's sure he'll be the first person to die there.

After a dust storm nearly kills him and forces his crew to evacuate while thinking him dead, Mark finds himself stranded and completely alone with no way to even signal Earth that he’s alive—and even if he could get word out, his supplies would be gone long before a rescue could arrive.

Chances are, though, he won't have time to starve to death. The damaged machinery, unforgiving environment, or plain-old "human error" are much more likely to kill him first.

But Mark isn't ready to give up yet. Drawing on his ingenuity, his engineering skills—and a relentless, dogged refusal to quit—he steadfastly confronts one seemingly insurmountable obstacle after the next. Will his resourcefulness be enough to overcome the impossible odds against him?

Posted by Lindsey Meyer at 10:28 AM No comments: 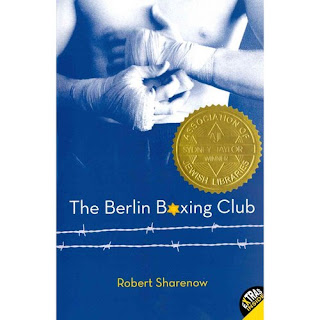 This was on my reading list as a potential contender for the Abe Lincoln list. I adored this story. I have read countless stories of historical fiction books focusing on the holocaust and typically enjoy them as I am interested in the topic. This book knocked it out of the park. The story focuses on Nazi Germany from 1932-1939. I found it interesting to focus on the lead up to the death and murders of the slow social changes of what it was like to be a Jew in Germany leading up to the war. I think this book will be loved by all.

Sydney Taylor Award-winning novel Berlin Boxing Club is loosely inspired by the true story of boxer Max Schmeling's experiences following Kristallnacht.
Karl Stern has never thought of himself as a Jew. But the bullies at his school in Nazi-era Berlin, don't care that Karl has never been in a synagogue or that his family doesn't practice religion. Demoralized by attacks on a heritage he doesn't accept as his own, Karl longs to prove his worth.
So when Max Schmeling, champion boxer and German national hero, makes a deal with Karl's father to give Karl boxing lessons, A skilled cartoonist, Karl has never had an interest in boxing, but now it seems like the perfect chance to reinvent himself.
But when Nazi violence against Jews escalates, Karl must take on a new role: protector of his family. And as Max's fame forces him to associate with Hitler and other Nazi elites, Karl begins to wonder where his hero's sympathies truly lie. Can Karl balance his dream of boxing greatness with his obligation to keep his family out of harm's way?
Posted by Lindsey Meyer at 10:25 AM No comments:

The Last Anniversary by Liane Moriarty 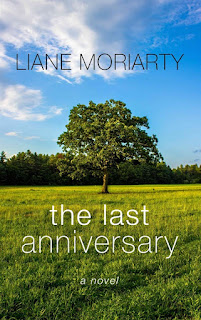 I think Liane Moriarty is my new favorite author. I have read 5 of her books thus far and love each book. Moriarty does a great job creating kooky characters and realistic family dynamics. Each books has been filled with great characters, plot and a little bit of mystery.

Amazon Summary
Sophie Honeywell always wondered if Thomas Gordon was the one who got away. He was the perfect boyfriend, but on the day he was going to propose, she broke his heart. A year later he married his travel agent, while Sophie has been mortifyingly single ever since. Now Thomas is back in her life because Sophie has unexpectedly inherited his aunt Connie's house on Scribbly Gum Island—home of the famously unsolved Munro Baby mystery.
Sophie moves onto the island and begins a new life as part of an unconventional family, where it seems everyone has a secret. Grace, a beautiful young mother, is feverishly planning a shocking escape from her perfect life. Margie, a frumpy housewife, has made a pact with a stranger, while dreamy Aunt Rose wonders if maybe it's about time she started making her own decisions.
As Sophie's life becomes increasingly complicated, she discovers that sometimes you have to stop waiting around—and come up with your own fairy-tale ending.

Posted by Lindsey Meyer at 10:20 AM No comments:

A House in the Sky by Amanda Lindhout

I lovd this book. From the beginning to the end it was a captivating, gripping memoir. I find myself still thinking and taling about this tragic story. I highly recommend this book to ALL.

Amazon Summary
Amanda Lindhout wrote about her fifteen month abduction in Somalia in A House in the Sky. It is the New York Times bestselling memoir of a woman whose curiosity led her to the world’s most remote places and then into captivity: “Exquisitely told…A young woman’s harrowing coming-of-age story and an extraordinary narrative of forgiveness and spiritual triumph” (The New York Times Book Review).

As a child, Amanda Lindhout escaped a violent household by paging through issues of National Geographic and imagining herself visiting its exotic locales. At the age of nineteen, working as a cocktail waitress, she began saving her tips so she could travel the globe. Aspiring to understand the world and live a significant life, she backpacked through Latin America, Laos, Bangladesh, and India, and emboldened by each adventure, went on to Sudan, Syria, and Pakistan. In war-ridden Afghanistan and Iraq she carved out a fledgling career as a television reporter. And then, in August 2008, she traveled to Somalia—“the most dangerous place on earth.” On her fourth day, she was abducted by a group of masked men along a dusty road.

Held hostage for 460 days, Amanda survives on memory—every lush detail of the world she experienced in her life before captivity—and on strategy, fortitude, and hope. When she is most desperate, she visits a house in the sky, high above the woman kept in chains, in the dark.