I loved this book. It reminded me a lot of Unwind by Neal Shusterman with the body parts and the futuristic idea of science. What an unusual idea and a thought provoking book. I definitely want to read this with the students next year for Book Club.

Amazon Summary
Travis Coates has a good head…on someone else’s shoulders. A touching, hilarious, and wholly original coming-of-age story from John Corey Whaley, author of the Printz and Morris Award–winningWhere Things Come Back.Listen—Travis Coates was alive once and then he wasn’t.Now he’s alive again.Simple as that.The in between part is still a little fuzzy, but Travis can tell you that, at some point or another, his head got chopped off and shoved into a freezer in Denver, Colorado. Five years later, it was reattached to some other guy’s body, and well, here he is. Despite all logic, he’s still sixteen, but everything and everyone around him has changed. That includes his bedroom, his parents, his best friend, and his girlfriend. Or maybe she’s not his girlfriend anymore? That’s a bit fuzzy too.Looks like if the new Travis and the old Travis are ever going to find a way to exist together, there are going to be a few more scars.Oh well, you only live twice. 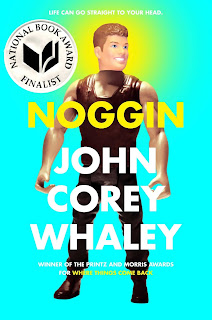 Posted by Lindsey Meyer at 3:00 PM No comments: 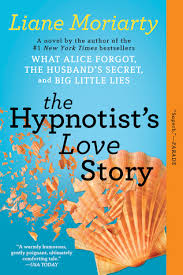 I loved this book! I love Liane Moriarty and I am sad that I have now read all of her books and have nothing left.

Amazon Summary
Ellen O’Farrell is a professional hypnotherapist who works out of the eccentric beachfront home she inherited from her grandparents. It’s a nice life, except for her tumultuous relationship history. She’s stoic about it, but at this point, Ellen wouldn’t mind a lasting one. When she meets Patrick, she’s optimistic. He’s attractive, single, employed, and best of all, he seems to like her back. Then comes that dreaded moment: He thinks they should have a talk. Braced for the worst, Ellen is pleasantly surprised. It turns out that Patrick’s ex-girlfriend is stalking him. Ellen thinks, Actually, that’s kind of interesting. She’s dating someone worth stalking. She’s intrigued by the woman’s motives. In fact, she’d even love to meet her.Ellen doesn’t know it, but she already has.

Posted by Lindsey Meyer at 2:27 PM No comments: