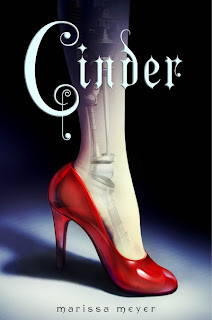 Cinder is a great combination of Science Fiction meeting a futuristic Fairy Tale of Cinderella. The reader meets Cinder, an orphan being raised by a step mother who hates her, two step sisters, one who adores her and one who can't stand her and a robot best friend named Iko.  She is the best mechanic on New Beijing, the Commonwealth where she resides, when a scruffy stranger shows up at her work to fix his robot. The scruffy stranger turns out to be the Prince and he asks Cinder to fix his Robot. Cinder doesn't even have time to tell her step mother and family because the plague is found in the market and Cinder returns home to find her sister has also contracted the plague. Blamed for her sisters disease she is given away to science to be studied as a cyborg, half human/half robot herself. This is where the story gets interesting. Pick up a copy of Cinder to find out if Cinder had survive the medical study and if she will ever get to see the Prince again.