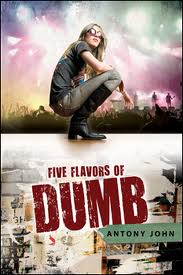 This was not my favorite Abe Book. In the end I did think it was a cute realistic fiction book and think plenty of students would like the book. Especially the music fans at LPHS.

Review
When in a rush of uncommon bravado high school senior Piper offers to manage Dumb, her school's most popular student rock band, her family thinks it must be a joke. A retiring student and member of the chess team, Piper is neither the stereotypical band manager nor a typical teen: she is profoundly hearing impaired. After she discovers that her parents have spent the majority of her college money to treat her infant sister's deafness with cochlear implants, Piper's quest to get Dumb a paying gig leads her to consider her managerial role as a potential source of income. John's novel is written with a reverence for popular music–particularly the work of Jimi Hendrix and Kurt Cobain–and a respect for its ambitious teen characters. Although Piper's hearing is a characterizing detail that could have been used solely to add a type of politically incorrect and screwball humor to the story, her abilities are seen as assets: while lip reading allows her access to public conversation, she is not above using sign language to obscure her intentions. The parallel attention to Piper's hearing family and the strain her parents' decision to treat her sister with cochlear implants adds to the greater story and informs the novel's direction and ending in a satisfying way.

Posted by Lindsey Meyer at 9:49 AM