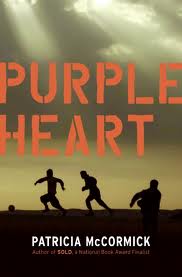 From the Publisher: When Private Matt Duffy wakes up in an army hospital, he's haunted by an image of a young Iraqi boy as a bullet hits his chest. Matt can't shake the feeling that he is somehow involved in the boy's death, but because of his own head injury, he struggles to put all the pieces together.'

Ms. Mangurtens thoughts
I gave this book a 3 out of 5. I liked it but it was not one of my favorite books. The topic is very interesting covering war and an injured soldier struggling to remember how he ended up in the hospital. His friends told him what happened, his sergeant told him what happened, but he seems to recall something else. What really happened the day that put him in the hospital and who is telling the truth?
Posted by Lindsey Meyer at 11:18 AM