Me and Early and the Dying Girl 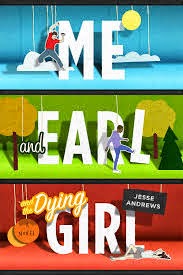 I wanted to like this book but I just couldnt get into it. I found the movie scenes to be annoying and slow. Not my favorite book.

Amazon Summary
A frequently hysterical confessional from a teen narrator who won't be able to convince readers he's as unlikable as he wants them to believe.
"I have no idea how to write this stupid book," narrator Greg begins. Without answering the obvious question—just why is he writing" this stupid book"?—Greg lets readers in on plenty else. His filmmaking ambitions. His unlikely friendship with the unfortunately short, chain-smoking, foulmouthed, African-American Earl of the title. And his unlikelier friendship with Rachel, the titular "dying girl." Punctuating his aggressively self-hating account with film scripts and digressions, he chronicles his senior year, in which his mother guilt-trips him into hanging out with Rachel, who has acute myelogenous leukemia. Almost professionally socially awkward, Greg navigates his unwanted relationship with Rachel by showing her the films he's made with Earl, an oeuvre begun in fifth grade with their remake of Aguirre, Wrath of God. Greg's uber-snarky narration is self-conscious in the extreme, resulting in lines like, "This entire paragraph is a moron." Debut novelist Andrews succeeds brilliantly in painting a portrait of a kid whose responses to emotional duress are entirely believable and sympathetic, however fiercely he professes his essential crappiness as a human being.
Posted by Lindsey Meyer at 8:20 AM