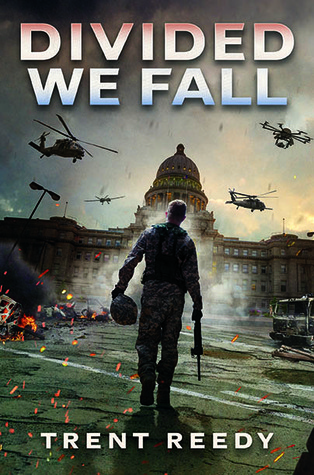 This book was not my favorite. I would usually not pick a book like this but I assigned it for book club and it is on the Abe list so I figured I should give it a try. There were many elements that I was engaged and on the edge of my seat but overall not my type of book. Very violent and descriptive with the violence. I can see some students really enjoying this read, but certainly not my favorite of all the Abe books on this years list.


Danny Wright never thought he'd be the man to bring down the United States of America. In fact, he enlisted in the Idaho National Guard because he wanted to serve his country the way his father did. When the Guard is called up on the governor's orders to police a protest in Boise, it seems like a routine crowd-control mission ... but then Danny's gun misfires, spooking the other soldiers and the already fractious crowd, and by the time the smoke clears, twelve people are dead.

The president wants the soldiers arrested. The governor swears to protect them. And as tensions build on both sides, the conflict slowly escalates toward the unthinkable: a second American civil war.

With political questions that are popular in American culture yet rare in YA fiction, and a provocative plot that asks what happens when the states are no longer united, Divided We Fall is Trent Reedy's very timely YA debut.

Posted by Lindsey Meyer at 2:53 PM