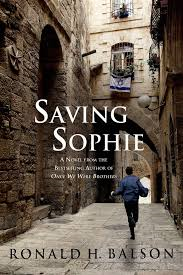 I loved this book. I loved the story, the plot, the characters, the mystery, everything. I am a big fan of Ronald Balson after reading Once We Were Brothers. I highly recommend this book to all.

Jack Sommers was just an ordinary accountant from Chicago-that is, until his wife passed away, his young daughter was kidnapped, and he became the main suspect in an $88 million dollar embezzlement case. Now Jack is on the run, hoping to avoid the feds long enough to rescue his daughter, Sophie, from her maternal grandfather, a suspected terrorist in Palestine.
With the help of investigative team Liam and Catherine, and a new CIA operative, a secret mission is launched to not only rescue Sophie but also to thwart a major terrorist attack in Hebron. But will being caught in the crossfires of the Palestine-Israeli conflict keep their team from accomplishing the task at hand, or can they overcome the odds and save countless lives, including their own?