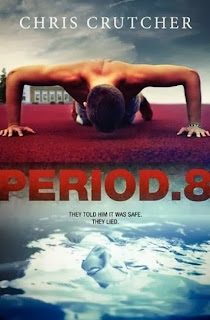 My Review
This book had such good potential for a strong lead male character and great character development. However, the author tried to create a suspense/mystery/thriller but ultimately the book fell flat. I enjoyed the story but felt unsatisfied with the ending.

Amazon Review
Bruce Logsdon's Period 8 session, held during the regular lunch period, is a place for Heller High School students to talk about their concerns and feelings. Logsdon, or Mr. Logs as he is called by his students, is gifted at getting teens to unburden themselves and speak honestly. Chief among his admirers is Paulie Bomb, whose unbridled honesty has cost him his relationship with his girlfriend, Hannah. When quiet, unassuming Mary Wells (called the "Virgin Mary" by other students due to her outwardly prudish behavior) goes missing, Period 8 must grapple with the fact that their safe space has been compromised. Issues centered on trust, forgiveness, extreme bullying, disturbing parenting, and reputations are prevalent throughout the story. Crutcher captures teen speak in a natural and realistic manner. Although the narrative begins at a deliberate pace, the drama over Mary's disappearance and incidents in the final quarter of the story ratchet up the intensity. Some sexuality and rough language are present, but it is never gratuitous or excessive. Mr. Logs is a positive portrayal of an involved teacher; he is dedicated to his students and genuinely concerned about them. However, his personal contacts with several students outside of school might, in real life, cause some concern among hypervigilant administrators and parents. Crutcher keeps readers guessing as to who is behind Mary's disappearance, and the portrayal of the psychopath is truly chilling

Posted by Lindsey Meyer at 3:20 PM