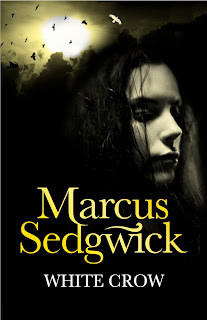 Review
I was not crazy about this book. The story is told from three different perspectives: Ferelith, The Priest and the Narrator. At the beginning of the book I found it confusing who was narrating and who the characters were. The plot line I found the most odd was The Priests. I thought the author did a nice job wrapping the story up but the beginning was too confusing for me to give this book a positive recommendation. I would put this in a gothic/fantasy/realistic fiction category. Very different than other popular YA titles out right now.

Some secrets are better left buried; some secrets are so frightening they might make angels weep and the devil crow.
Thought provoking as well as intensely scary, White Crow unfolds in three voices. There's Rebecca, who has come to a small, seaside village to spend the summer, and there's Ferelith, who offers to show Rebecca the secrets of the town...but at a price. Finally, there's a priest whose descent into darkness illuminates the girls' frightening story. White Crow is as beautifully written as it is horrifically gripping.
Posted by Lindsey Meyer at 12:00 PM