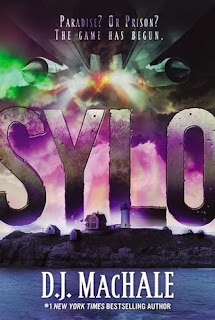 Review
I picked this book up at the book fair and bought it for the Library because of the author reviews on the back. I liked all of the authors who wrote positive reviews so thought I would give it a try. I enjoyed the book and found it to be fast paced and engaging. I think this book is similar to Maze Runner or Gone as there are so many questions remaining for the reader. I liked the book but I also have a difficult time when I don't understand everything that is happening. I think students will enjoy this book as they continue to question who is good, who is bad and who really is SYLO.

Amazon Review
MacHale's current-day dystopic series opener begins with a mysterious death and gets stranger from there. On Pemberwick Island off the coast of Maine, Tucker Pierce, 14,  is vaulted onto his high school football team's starting lineup after a star player falls dead at the end of a game. To clear their heads, Tucker and his friend Quinn Carr take a late-night bike ride on the road that runs around the island's perimeter only to encounter a shadowy flying object that emits strange music that then explodes over the water. Within a few days, a stranger to the island offers Tucker a “supplement” called “the Ruby” that makes him feel superhuman. Then a military force wearing red camo uniforms with a patch bearing the word “SYLO” takes control of the island, and the president announces a quarantine until the CDC can identify and neutralize the “Pemberwick virus.” Tucker and Quinn don't know what to make of events or who to trust as martial law takes over. In desperation, the teens make plans with Tori Sleeper, a lobsterman's daughter, to use her dad's two boats to escape the island. MacHale pens some terrific and unique action scenes, but they never overwhelm the story as the characters face one quandary, riddle, or dilemma after another in unraveling the mystery of what is happening. The shocking ending will leave readers hungry for the next installment.